Nothing says poignant like a father-son adventure: Dad showing Junior how to build a fire, set up a tent, or perhaps paddle a canoe. In Wells Tower’s family history, there has been plenty of that. Wells and his father, Ed Tower, a professor emeritus of economics at Duke University, embarked on their first journey together, to the Galápagos Islands, in 2000, the year Ed was diagnosed with lymphoma. Eight years later, when they booked the trip to Iceland and Greenland that would provide the action for “Meltdown,” what began as a once-in-a-lifetime bonding excursion had turned into an annual father-son tradition, one that typically devolved into farce, frequently surrounding Ed’s fondness for being nude. (This would come in handy a few years later when Wells took his dad to Burning Man; not so much when the two were sharing a hotel bed in France.)

When Wells’s older brother, Dan, came along, the trips could escalate into bitter feuding. The Tower boys had fought all their lives, with fists, knives, canoe paddles, and, once, scalding-hot brownie batter.

This 2008 story reveals the hilarious dynamics of family travel. On a trip to Greenland with his father and brother, after only a week the author was seized by a tantrum-pitching impulse and the overwhelming desire to punch himself again and again in the face.

Such sibling love is also a hallmark of family travel. Thankfully, the Tower boys have outgrown their hatred, but readers benefited from it in “Meltdown” and several other Wells stories, including one in which he and Dan competed in Venice’s famed Vogalonga regatta, with predictably catastrophic results.

Wells talked to Outside from his home in Durham, North Carolina, where he lives with his wife and six-year-old son. A prolific magazine writer and an author of short stories—some of which are collected in his first book, Everything Ravaged, Everything Burned—he’s busy these days as a screenwriter. Netflix recently bought his original screenplay for Pain Hustlers, a film about pharmaceuticals, conspiracies, and the American dream, which will star Emily Blunt.

Elizabeth Hightower Allen, who interviewed Wells for this update, asked him who should be chosen to play the Tower men if Hollywood ever makes a film of “Meltdown.” “Oh, John Lithgow for my dad,” he said. “Danny McBride for my brother. And for me, maybe Peter Sarsgaard. Unless he’s too hunky. If that’s the case, maybe Bud Cort from Harold and Maude.”

OUTSIDE: First, how is your dad? In “Meltdown” he was in remission from lymphoma, and when I read one of your later stories, he was going through chemo again. I got a little worried.
TOWER: He’s good. His recurring illness was kind of a gift in that way—it led us to operate under the idea that he was going to drop dead at any moment. We would take all these trips and be acutely conscious of how much we mattered to one another. Somehow he just kept on ticking. He’s going to be 80 next year. I was recently down on the North Carolina coast with him and my son, Jed, fishing together. So yeah, we’re lucky.

What was the first trip you took once he was diagnosed?
It was a pretty scary situation initially—he was given a super bad prognosis, because he had a weird kind of lymphoma. But my stepmother did an amazing job researching hospitals. He was treated at MD Anderson in Houston and went into remission pretty quickly. So when we decided to take a big trip, we chose the Galápagos, which seemed far and extravagant. I think maybe we were thinking he wasn’t going to survive. Later we went to France, and Southeast Asia a few times when he was teaching in Bangkok. But the Greenland trip was the most exotic one we’ve done.

Where would you place it on the continuum of awful family vacations?
Well, there was a great one, before my dad’s mortality scare, when he was teaching in New Zealand. We went out to Great Barrier Island, near Auckland, where a friend of his had built a little cabin in the woods. Before that we mostly cruised around to vineyards—the idea was to fish and hang out in the cabin and drink great wine. It was a long hike into the cabin, and we had terrible gear, duffle bags full of clanking bottles. When we finally got there, it started pouring rain. The place had been built out of whatever logs this guy had chopped down and propped into a semi-waterproof structure, and all we could do was hang out in this dank little cabin.

Our first night, we drank too much and crawled into a tiny bed we had to share. It just smelled gross; this was not a sumptuous set of digs. When I woke up in the morning, I had what looked like Concord grapes all over my body, and I thought, Oh my God, what’s the deal here? It turned out it was rodent feces. I jumped out of bed and saw, right where our heads had been, the corpse of this gigantic, bloated, decaying jungle rodent. I’d had my head on it a little, and my father had been fully using it as a pillow.

I have to ask: Was your dad naked?
Probably, yes. If he wasn’t, it was because I’d always make him put on something before we shared a bed. Anyway, that experience became kind of the keynote for our trips.

Was your brother there?
Greenland was the first trip Dan joined us for. We argued so spectacularly that a few years later Outside sent us to Venice, where we ended up in the Grand Canal, trying to beat each other up in a kayak.

In “Meltdown,” your dad is adorable, chatting and dancing with people, but also totally embarrassing. Meanwhile, your brother has an epic pout.
Dad’s a great person to travel with, because he never lets anything get him down. Whatever curveballs the trip throws, he finds a way to turn it all into part of the adventure. Dan really likes to be in control, and when we landed in Iceland he had a vision for what we were going to do—that we’d just hang out in Reykjavík for the next ten days and do some day trips. And I was like, Dude, we are doing the story for Outside. We promised them glaciers and hikes, and that is what’s happening. He was so irritated that I pulled rank on him. I mean, I default to my own babyish tendencies when I’m around him. But now that we both have kids, we’ve grown up a bit. I tell myself that we’ve both really matured and we could do a grown-up trip together.

Did it ever get to the point where your brother was like, Stop writing about me?
We had a breakthrough moment with the fact-checking for “Meltdown.” That trip was so bad, and I guess my assumption had been that Dan would never read the story. I thought, I’ll just get Dad to confirm everything. Then of course the fact-checker, being a scrupulous person, wanted to talk to Dan. God. OK, fine. So I had to call him up and get him on board. It was a whole thing. But after their conversation, Dan called me and said, “You know what? It sounds like you got it right. You were really being a jerk, and I was doing my thing, and you were being a dictatorial schmuck. You told it right.”

You have your own family now, and Outside sent you camping in Great Smoky Mountains National Park when your son was a newborn. What’s your travel dynamic?
None of the Tower-family travel-related psychodrama seems to be part of this next generation. Jed’s a good traveler. My wife, Erin, is a great traveler. If anything, I think that, in my wife’s perception, I’m fairly ineffectual. I cannot Tetris the station-wagon trunk to save my life. What usually happens is that I entertain Jed while my wife says, “Get outta my hair. I’m gonna pitch this tent. I can’t deal with any of your frustrations or opinions about where this needs to be.” And everything seems to work very well.

During the pandemic, we had these van-life fantasies, and now we’re finally picking up the teardrop camper we ordered. It’s basically a queen-size bed on wheels, but then we put a small roof tent on top so it can accommodate everybody. There’s a little fridge and a cooktop and solar. It’s really gonna boost our game.

In order of travel partners, how would you rank these: father, brother, wife, baby?
I gotta give it to Dad. You always get an adventure with that guy. There have been trips where things went wrong. But often these are trips I am writing about, so in a reverse kind of way, it’s a gift.

How have those trips changed your relationship?
When I was a kid, I would get so embarrassed, because he was always the guy who would take his clothes off in the parking lot at the tennis court to change. He was just somebody who was unembarrassed, and now I realize it’s a fantastic quality. This trip we just took down the coast, we did a half day of fishing where there was a guy baiting the hook and casting for you. I’m such an uptight rule follower, I’m like, “Those are the rules—he’s gonna bait and cast. I’m not gonna do anything.” But my dad was like, “Hey Jed, let me show you how to cast the rod.” And I’m thinking, Oh God, is he breaking the rules? But he’s not. It’s great. He’s teaching Jed how to cast.

When Jed gets old enough to write a piece about an adventure with his dad, what do you think he’ll write?
I hope I’m able to be as fearless and embarrassing as my father. I hope it’s not My dad is a stick-in-the-mud who’s not gonna risk casting the reel for fear of offending a boat captain. I probably should consciously start accumulating a list of travel commandments from my dad.

What’s your advice for traveling with family?
Other than to do it with love in your heart, what more can you say? 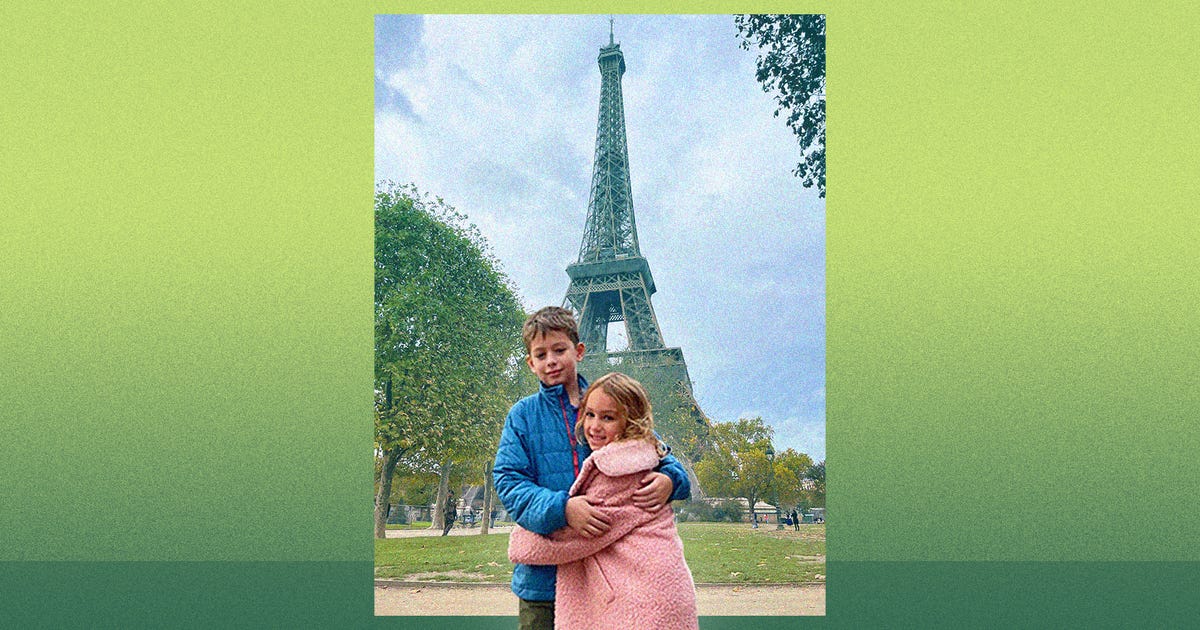 How I Made My Family Trip to Paris Easier, Cheaper and More Meaningful