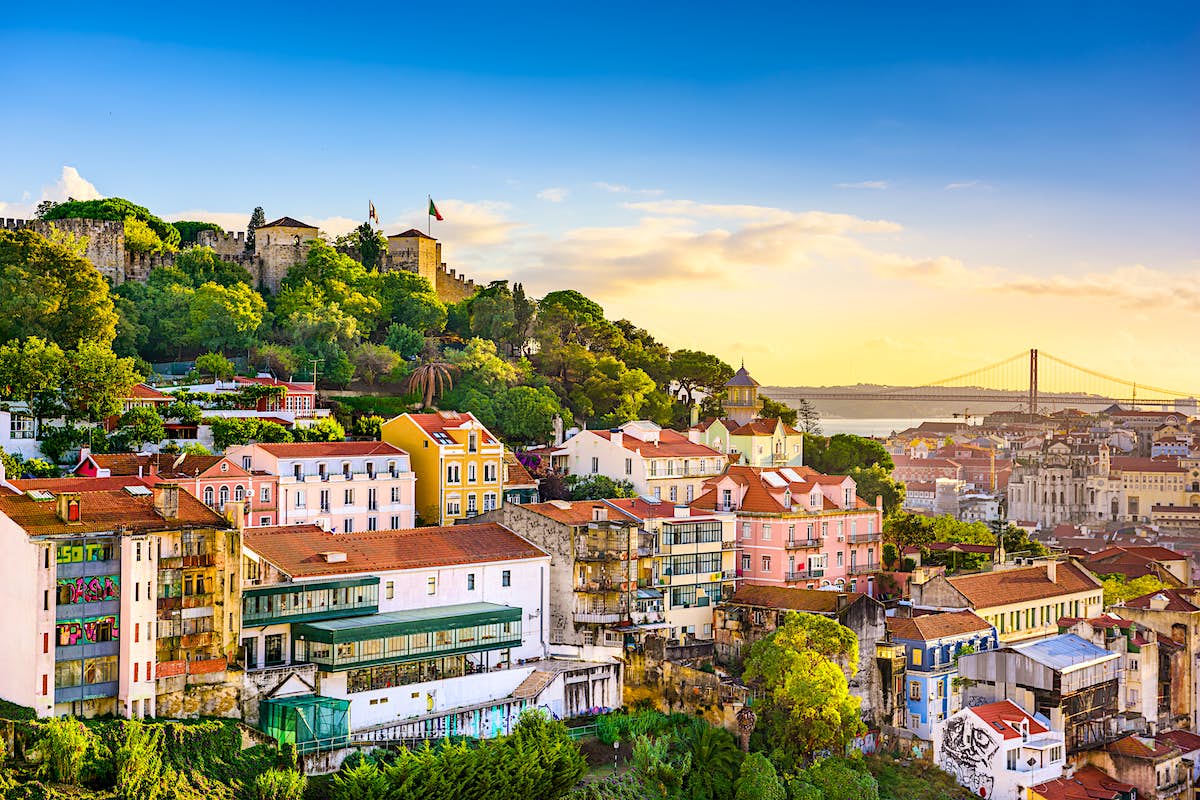 At first sight, Lisbon is a colorful cluster of tile-covered buildings cascading downhill along the north bank of the Tagus River. But although the boundaries between them might blur, each of Lisbon’s neighborhoods has its own distinct personality.

A few days might be enough to tick off many must-see sights in Lisbon, but don’t rush the journey. Instead take in the atmosphere of Lisbon’s neighborhoods one block at a time.

Best neighborhood for day trips to the beach

With sprawling manicured gardens, expansive riverside squares and Manueline-style monuments honoring the seafaring voyagers of the 15th century, Belém often gets the attention of travelers for no longer than a day. For those on a short visit, it doesn’t take more than a morning to visit Mosteiro dos Jerónimos, Padrão dos Descobrimentos and Torre de Belém, including a pit stop at Pastéis de Belém for the famous custard tart – best eaten straight-from-the-oven, warm and sprinkled with cinnamon.

But this Lisbon neighborhood, once the suburban summer refuge of royals, has an ideal – and often overlooked – location for those who want to wind down from their urban exploration with time at the beach. Either take the ferry across the river to Trafaria, and a bus from there to the beaches at Costa da Caparica, or hop on the train to Carcavelos.

Accommodations in Belém are a mix of international chain hotels, high-end luxury spots, and a few budget-friendly hostels and guesthouses. Riverside cafes and restaurants cater mostly to tourists, but Lisbon’s city center is just a 10-minute train ride away if you’re looking for more variety and eating spots with a more local feel.

If you ask locals where Santos ends and Madragoa begins, you’ll rarely get the same answer. Madragoa and Santos are usually bundled together as one neighborhood, and no one seems to mind them often being referred to as a single place. Offices, schools, Instagrammable cafes with decent and free wi-fi, a mix of traditional and modern restaurants, and the vibe of a typical Lisbon neighborhood are the gist of the Santos/Madragoa duo: bustling business area by day and a quiet residential neighborhood after office hours.

Fully equipped and furnished short-term rental apartments and a cluster of coworking spaces a short walk or train ride away in nearby Cais do Sodré and Baixa-Chiado have turned Santos and Madragoa into a coveted spot for digital nomads. Fairly well-served by public transit, grocery stores, affordable cafes and restaurants, it’s the place to stay for travelers looking for a slice of local Lisbon life.

Museu Nacional de Arte Antiga is one of the few must-see sights in this neighborhood, but the monuments and landmarks aren’t the reason for a visit. Instead, roam the streets and take in the balance between the old and the new, tourist-centered businesses and family-owned establishments, riverside bars and cobblestoned backstreets with laundry hanging out to dry.

All the historical and cultural layers of Lisbon overlap here. Take the time to stroll through the post-1755 earthquake rebuilt Baixa, discover hilly Chiado and its picturesque squares, and the wavy black-and-white patterns of calçada Portuguesa (Portuguese pavement tiles) in Rossio. To fully see the contrast between these neighborhoods, head to the viewpoint at the top of Arco da Rua Augusta.

After a morning of sightseeing, go out window shopping or buy some souvenirs. At Baixa’s main street, Rua Augusta, you’ll find old traditional stores coexisting with tourist traps overflowing with cheap fridge magnets, and poor value restaurants with questionable menus. Rossio is all about big plazas and their statues, flanked by overpriced souvenir shops with a few local gems thrown in the mix, like the 19th-century hattery Azevedo Rua. Chiado has the old-town charm of historical cafes like A Brasileira and Pastelaria Benard, ideal for a break after perusing the upscale shops at Rua Garrett.

These touristy neighborhoods have Lisbon’s densest concentration of hotels, hostels, cafes, restaurants and shops, making it the best area to stay when visiting Lisbon. Travelers have direct access to two Metro lines (Blue and Green), the urban train to Sintra, and myriad buses and trams. Historic neighborhoods and top landmarks are a short – but uphill – walk away.

The neighborhood of Mouraria has narrow streets flanked by full-to-the-brim stores (where you can buy everything from power adapters to spices in bulk), traditional restaurants busy at lunchtime, and locals speaking dozens of languages. In Alfama, you’ll find sunlit terraces, terracotta rooftops and Lisbon’s most famous viewpoints.

Small- to mid-sized boutique hotels and short-term rentals are the most popular accommodation options in Mouraria and Alfama. Stay here if you want a hint of that old-town authenticity and don’t mind the tourist crowds and fewer transportation options. Both Alfama and Mouraria are best explored on foot, with the occasional hop onto one of the classic yellow trams to dodge a steeper hill.

Bairro Alto and Cais do Sodré

Best neighborhoods for restaurants and nightlife

Bairro Alto is the more charismatic of the two, with patrons gathering outside the tiny bars with a drink in hand before heading off to wherever the night leads them. In the post-democratic revolution of 1980s Lisbon, this district became the city’s bohemian hot spot, where students and artists flocked, yearning for the musical and intellectual freedom that thrived here after five decades of a conservative dictatorship. Although things have changed a bit since then, BA (for short) is still seen as the affordable, unpretentious night-out spot of Lisbon.

On the other hand, Cais do Sodré is Lisbon reinvented. Once a shabby haunt for on-leave sailors, cheap and sketchy bars were the norm. These days, only the old names and decor of those places exist, a nod to how that part of the city went from a red light district of sorts to one of Lisbon’s most popular nightlife neighborhoods. Pensão Amor is the best example of that past and present fusion.

This eastern neighborhood of Parque das Nações grew around the former grounds of Expo 1998, and it’s the newest part of Lisbon. Although the city center is a train or metro trip away, it doesn’t take more than 30 minutes to reach must-see attractions. The urban park itself is a great playground for kids, but the real family-friendly gems are the Oceanário, one of the largest aquariums in Europe, and Pavilhão do Conhecimento, an interactive science museum for kids and grownups.

Parque das Nações is one of the best neighborhoods in Lisbon for families, with big chain hotels concentrated between the park and the Oriente station, the public transit hub for trains, metro and buses. A good mix of grocery stores, small local food shops, and family-friendly restaurants make it easy for planning meals before or after a day of sightseeing across town.

How to spend 24 hours in Lisbon, Portugal

Over-Hyped Attractions Around The World